Humans have very, very big brains. Bananas seem to be the standard unit of measurement on the internet now; and you’d need to eat about six of them a day just to fuel our stupidly large brains1. So why did our brains get so absurdly, bannana-famishingly large? Evolution is messy and a lot of forces influence the evolution of a trait. In the case of our big brains scientists have discovered that dealing with social situations, adapting to climate change and (maybe) our diets are all factors that prompted our brains to grow big. Now, a pair of researchers from the UK think they can add another factor to the list: tool use2.

I’ve come from the internet to teach you science

Now, it might seem obvious that tool use was a fairly major force driving the evolution of our big brains. After all, our fancy technology is the most obvious outcome of our big brains and it’s probably the hardest thing we have to deal with in our daily lives. Especially if you don’t use a Mac. So why is this news?

Well we thought that it didn’t quite line up; evolutionarily speaking.

Chimps are great tool users but have a piddly brain compared to us, about 1/3 the size. Even when our ancestors began developing better technology than chimps they still had chimp-sized brains. Most of our big technological leaps have come in the last 10,000 years or so; but our brains have been pretty much unchanged for the past 195,000 years (if anything, they seem to have gotten smaller). Whilst our big brains have helped our tools become very fancy, this doesn’t seem to be a primary reason we evolved those brains in the first place. The correlation just isn’t really there. 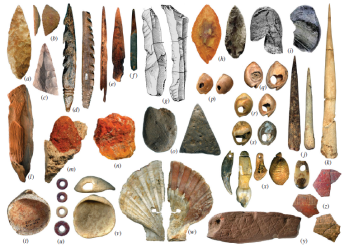 Some of the fanciest stone age tools and artefacts our ancestors made; all of which were invented after our brain stopped growing.

Well it all comes down to allometry (which actually came up a week ago in an unrelated topic). For those of you who don’t religiously memorise my posts (and this just goes to show why you should); this all boils down to scaling. Imagine an animal evolves to be twice as large as it used to be (to stomp on predators or something). Anything which also doubles in size (such as the brain) is said to have increased isometrically and isn’t very interesting as it’s just a by-product of the animal becoming larger. However, anything which changes at a faster/slower rate is said to have changed allometrically. Now that stuff is interesting because it indicates evolution wants that bit to be extra small/big.

For humans, although we’ve become taller than we used to be our brains have increased allometrically, being about 7 times as large as you’d expect for a mammal of our size3. Another notable part of the body that is larger than it should be is the human penis, fyi.

Now this new research into tool use and our big brains looked our noggins to figure out which bits had increased allometrically. They also compared the brains of closely related primates to estimate the rate at which they’d changed as well. The most interesting discovery to come out of this was that our cerebellum was a lot larger than it should be; and the rate at which it’s been growing has actually been increasing over time2.

The rate at which our cerebellum has been increasing has itself increased 3.14 times over the course of our evolution (relative to non-apes). This is a pie-licious change that’s led to us having a cerebellum about 30% larger than we should have. At this point it’s worth noting we weren’t the only benefactors of super-cerebellums. In fact, bonobos actually had an even faster rate of increase, with their rate of cerebellum growth increasing 5 fold. Other interesting results include the fact that the cerebellum typically increases at the same rate as other parts of the brain, but in humans (and other apes) the rate of cerbellum growth has taken off2.

The size of the cerebellum and neocortex in the human family. Note, the time scale is backwards; so 0 actually represents ~60 million years ago

So why is this a big deal? Well, as I suggested at the start of this post, the cerebellum is linked with many of the cognitive processes needed for complex tool use. In particular, it’s involved with fine motor control and planning out sequences of moves. Thus, the researchers hypothesise, tool use and fine motor skills became important. Evolution selected for the abilities that allowed this; in turn increasing the size of our cerebellum2. This may also explain why it wasn’t really noticed before. The cerebellum is relatively small (making up ~10% of our brain), so the 30% increase observed in this study might not be noticable when looking at fossils.

I can see it now. A jungle where dancing has been outlawed. Ape-Kevin Bacon arrives (who is surprisingly similar to the real thing) to teach the native apes what they’re missing out on; increasing their cerebellum and evolving them to the next level in the process….

8 thoughts on “Our big brains evolved to make tools”