The cave of Abauntz in Spain has a long history. It was first inhabited by Neanderthals, who were replaced by stone age humans. Even some Bronze Age people lived in the cave for a while. But the most fascinating thing about Abauntz cave is an engraved rock, found in the stone age human layers (dating to ~13,530 years ago; +/-160 years). It contains several depictions of animals, along with a series of apparently meaningless squiggles. Meaningless, that is, until some archaeologists realised that they matched the surrounding landscape very well. Could this be Western Europe’s oldest map?

The rock appears to depict a tributary joining a river near the base of a mountain. This river then swings south, reaching a flat area that seems to be depicted as flooded. And sure enough, the archaeologists note, there is such an environment within an hours walk of the cave. Two rivers join near a mountain, before heading south to a flood plane that does regularly flood (especially after the snow melts). The mountain near the rivers is even visible from Abauntz! They even note that the engraved animals appear to correspond to the landscape. The animals depicted near the mountain are Ibex, whilst reindeer are drawn over the flat grasslands. 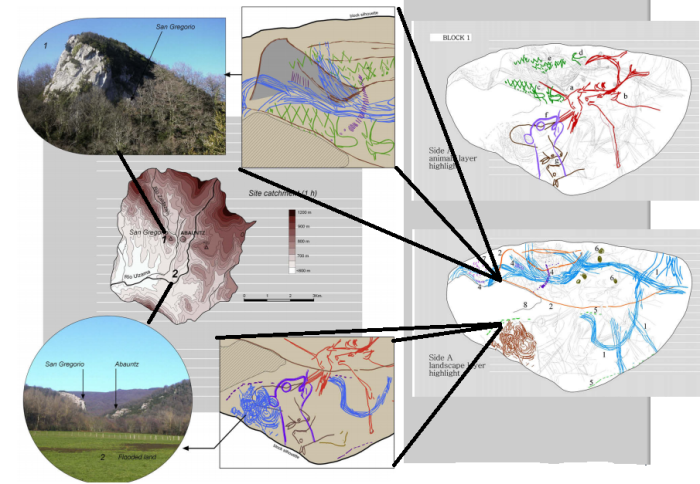 Their case seems watertight. That is, I think, until you look at the actual rock itself. The researchers have highlighted the rocks in brown, the rivers in blue and the grass in green. Whilst I don’t think it is an intentional intent to deceive it does colour your interpretation a bit (put in on the scorecards guys, 250 words in and we get to our first pun). Looking back at the original, uncoloured rock it becomes a lot harder to recognise the landscape. Is it a river or a series of lines? Is that grassland or a cross hatched pattern?

I think it’s still an interesting engraving whose resemblance to the landscape carries with it some interesting implications. And if you think I’m just being overly critical and you can easily see the map in the original, I can’t fault you. I just think, like with some much research into prehistoric art, you need to take it with a dumptruck’s (or two) worth of salt.