Humans specialise in being smart. It wasn’t our sharp teeth that allowed us to rise to dominance chain but our brains. It provides us with the intelligence needed to build a metaphorical ladder to the top of the food chain. Yet what is it about our brains that makes us so smart? Is there something unique to the lump of organic matter in my head that distinguishes it from a chimp’s lump of organic matter or are they just variants of the same basic brain?

The most obvious difference between the two is brain size. Despite the fact that both Homo sapiens  and Pan troglodytes  have a very similar body size our brain is nearly thrice the size of a chimp brain. In other words our brain is bigger than would be expected given how big our body is. This is known as encephalisation and humans are indeed highly encephalised with our brains being over 7 times bigger than would be expected.

This increase in size is best explained by the social brain hypothesis, which postulates that it evolved larger to facilitate larger groups. This allowed them to better defend against predators, forage the landscape and so forth. Eventually the brain was sufficiently big that it could also be used for other things, like making fire, and these acted as additional benefits compounding the evolution of bigger brains.

So our brain is big, but is that that the key difference? If I were to magically make a chimp’s brain three times bigger (and also use my new found magic powers to make their skull appropriately bigger) could they develop the cognitive abilities of a human? Many have suggested that this would not be the case and our brain has many other unique components. According to these individuals a human brain is not simply a giant chimp brain.

As a test of what you’ve learnt on EvoAnth I challenge you to guess which one is human and which one is chimp!

However, new research purports to disprove many of these differences between human and primate brains. Suzana Herculano-Houzel used a technique she created back in 2005 called the “isotropic fractionator.” Whilst I’m not familiar with the specifics it purports to offer a reliable way of counting the number of cells in a brain. And counting brain cells is what she’s been doing, documenting the number of cells in over 20 species.

Her results revealed that there is a relationship between the number of neurons and brain size. Which is kind of obvious. What’s less obvious (and thus more interesting) is that different groups of animals have differing relationships between the two. A rodent brain, for example, has less neurons than a similarly sized primate brain.

The exponent between between brain size and number of neurons for different species. The larger the number the less dense the neurons (click for larger image, you’ll probably want to do that)

The data provided even more interesting information, hinted at in the above image: different parts of the brain had different rules governing the relationship between brain size and number of neurons. Of particular interest is the cerebral cortex since it is often associated with intelligence (and especially large in humans).

Whilst neuron numbers varied across different groups of animals and in different areas of the brain, non-neuron numbers had a relatively stable relationship with brain size. Increase the brain size by x and the number of non-neuron cells also increase by x in a nice, linear fashion. This result is relevant given that, although they don’t get as much press as neurons, non-neuron cells also appear to be involved in intelligence.

All of this suggests two key things. Firstly that primates have evolved a much more efficient neuron set-up than other animals, being able to pack many more neurons into a much smaller area. This explains why a non-primate with a brain the same size as a primate is often not as intelligent. Secondly, non-neuron cells are much more restricted in how they can evolve. The lack of variation in their relationship with brain size indicates that any such variation is detrimental and so being organised how they currently are is either necessary for the brain to work or optimal. 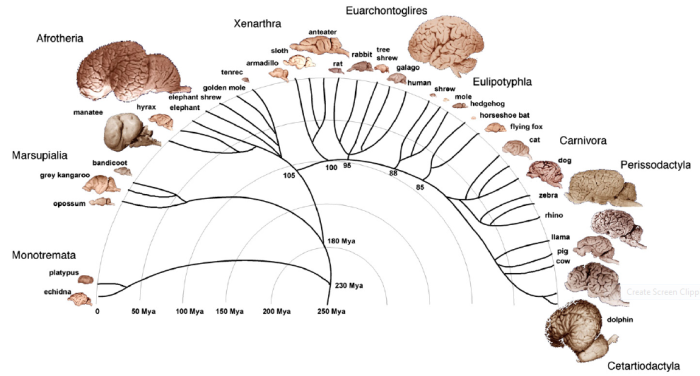 Some of the species examined in this study, along with their brains. Again, click for the larger image

As well as these two general points about the brain the researcher was also able to make more specific statements about the primate brain. They then looked humans to see if our brain also followed the same rules. In other words, if you would get a human brain by simply scaling up a primate brain. She found:

So essentially humans have giant chimp brains. It turns we aren’t as unique as many have suggested we are. However, if that’s got you feeling down, remember that we still have a large brain. Combined with our high density of neurons this means that we probably have the most neurons of any species!

More true than you know

That said, I have two major qualms with the study. The first is that I couldn’t find a description of the “isotropic fractionator” either in this paper or her citation for it. As such I don’t know how reliable it is. The second is the small sample size, with only 7 non-human primate species being examined and only 1-3 members of each species being studied.

However, the “isotropic fractionator” (which is sounding more like an evil geniuses super-weapon the more I say it) has been employed by other scientists so there are clearly a number of individuals who have deemed it to be reliable. And at the rate Suzana Herculano-Houzel is measuring brains the small sample size will soon be rectified but until then the conclusion should be taken with a grain of salt.

A bigger concern I have (and did not list earlier, what a twist!) is that other research is revealing other changes to the human brain that would not be picked up by just counting cells. SRGAP2 mutations, for example, seem to have changed the very cells themselves! As such there may well be “hidden” differences between humans and primates.

So where does that leave us? Well this study shows that many of the alleged differences between human and chimp brains are non-existent. Relatively speaking we have the same number of neurons, non-neurons and all the various bits are the same size. However, this doesn’t show that the human brain is essentially a giant chimp brain but it does make us a lot less special. As a result its evolution isn’t necessarily that special either.

I didn’t post last week because I was on holiday. I would apologise for this except I’m not really sorry as I had a very nice time.