Scientists are baffled! It seems like every other media report on science opens like that. Like news stories about the recent discovery that art may predate our species, which focused very much on how this research was something  “we never expected to find” and “challenges” what we knew.

Whilst this might make a nice media narrative, it isn’t really representative of science as a whole. Yes, science doesn’t know everything. If it did we could all go home and that money could go on a few extra javelin missiles or something. But it isn’t as though researchers are blindly stumbling around in the dark either. There are hypotheses, theories and predictions that guide us. Palaeanthropologists don’t find fossils by just going to Africa, throwing a Frisbee and then digging a trench where it lands.

This misrepresentation of science is having some more nefarious consequences than just helping newspapers sell a few more copies. It fosters public misunderstanding of science and scientists; and undermines the credibility of the process. Creationists are already leaping on the “surprising” nature of the early art to try and invalidate human evolution. Creation Evolution Headlines notes

Everything in evolutionary paleoanthropology is a surprise, because they are so wrong, they are not even wrong.  “Surprised” is the new normal.  Hearing that a new finding will “challenge all we thought we knew” is normal.  Reading that a new find raises big, hairy questions is normal.  Hearing that it has “profound implications for human evolution” is normal.  What would really be surprising would be to find an evolutionary anthropologist declare that a finding was just what they expected.

(hat tip to Ashley for pointing that article out)

So, to try and show that science works (bitches) I decided to do a bit of research into research. I examined all of the studies published in the journal Human Evolution in volumes 72 – 76; looking to see how often scientists really were baffled. The results are presented in a handy colour-coded chart below.

Studies that didn’t examine any previous researchwere excluded from this examination1. 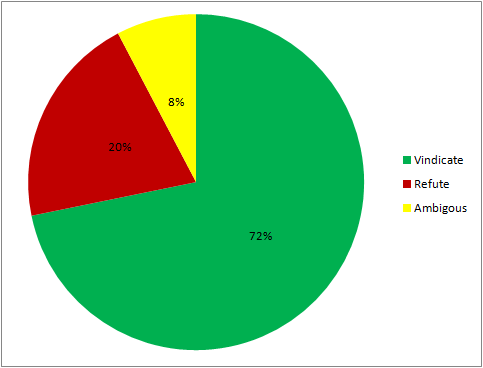 I’m shocked, shocked I say! Well, not that shocked

As you can see in the vast majority of cases the research does vindicate existing findings. The results are what the scientists expected. Very little baffling anywhere.

It’s also worth noting that this is simply looking at how frequently existing research was challenged. Often, researchers think that an idea is flawed and will be disproven eventually; so it’s ultimate refutation hardly counts as baffling. Or it’s typically the case that two competing hypotheses are being compared. Whilst the researchers’ preferred idea might be disproven, there’s obviously another team out there who are quite happy (and completely unbaffled) by the results. And of course there’s always the fact that a positive (or maybe ambiguous) result could be surprising in its own right.

In other words, my little study is imperfect; but would likely significant overestimate how often researchers are befuddled. Yet it still shows that surprising, total refutations of ideas occur very rarely. Even then; the unspoken assumption here is that such cases are somehow bad for science. Hardly. Science isn’t a dogma that is harmed by such challenges. Science flourishes in the unknown, in the surprising.

What I’m trying to show here is that science works. Contrary to what the news media and creationists would have you believe, we aren’t just stumbling in the dark without a clue. Palaeoanthropology contains many strong theories and hypotheses that help us predict what we’ll find (and continue to be vindicated by such predictions). These ideas are far from perfect and will likely be ammended in the future. There are also many surprises out there waiting for us. But there’s a big difference between “baffled by everything we find” and “perfect knowledge of everything”. Science – as this little examination hopefully demonstrates – inhabits the gap between those two extremes.

Oh, and clearly I now have many examples of palaeoanthropological discoveries that were “just what they expected.” So I look forward to the author of Creation Evolution Headlines to publish a follow-up talking about how surprised and baffled they are.

6 thoughts on “Scientists baffled….in a minority of cases”