For most of our history humans appear to have lived in egalitarian groups, without a leader commanding obedience. However, at some point in the last 15,000 years many cultures underwent a social change; developing an organised, hierarchical leadership. Given the current state of politics; many of you may be jokingly asking why they made such a change (or if you’re an anarchist; maybe you’re asking this a bit more seriously).

Yet joking or not, this is still a question many anthropologists ponder. After all, having a leader raises the possibility of having a despot ruling over you. Even with the good leaders, the common folk still often have to give a portion of their hunt/farm/income to the leadership. If you’ve got an egalitarian society ticking along quite nicely, why change; particularly given these issues? 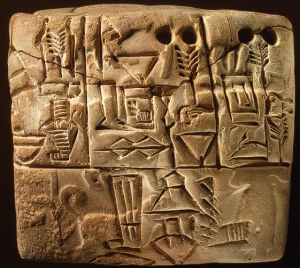 Some of the earliest administrative documents. Do they mention the earliest leaders I talk about? I dunno, I don’t read cuneiform

Fortunately for people interested in how leaders were born, in some cases this shift also happened around the time of writing. Such records reveal that in Mesopotamia the first political leaders (who were also religious leaders) were irrevocably tied into food production. Everything produced by the city would be gathered by them at the temple, where it was promptly divvied up amongst the citizens2 in a manner I’m sure would make Karl Marx proud. Elsewhere a similar pattern appears to hold true, with a leadership developing around the time a society began producing a lot of food (and promptly taking over, or at least regulating in some way, the production of this food).

This has led many researchers to propose that the “evolution” of leaders was the result of food surpluses (which, in turn, were typically – but not always – the result of farming). Perhaps as people could produce more than they needed, some individuals began to build up resources which they could use to bribe and coerce others into making them leader. Or maybe it was more benign. With a food surpluses, not everyone needs to gather food; and could specialise in making tools or something else. But if everyone were to shift away from food production, the effects could be disastrous. Maybe societies turned to a charismatic individual to help organise everything and stop the group imploding when everyone decided they’d rather make vases than go hunting. There are many more possiblities, and it’s likely no single one is right. Different groups could’ve taken different paths towards a structured leadership. Nevertheless, there is one common theme in many of these hypotheses: leadership is the result of resource surplus.

However, two researchers from Switzerland recently asked an interesting question: what if it was the other way round? The pair created a very elaborate computer model simulating a society and every so often randomly selected one member to be a “leader” (assuming that the people in the society wanted a leader). They varied the properties of the society and the leader quite extensively, to see what were the key variables that made it likely the society would stick with the hierarchy and not return to the egalitarian state. Things like was the society making a surplus, did the leader help make more food, did the leader demand tribute, how close were other societies, did they have a leader. The list goes on.

Long story short; they found the critical variable was “does the leader make things better”. If the society wasn’t producing more food with the leader in charge, the position was untenable. It didn’t matter if it was making a surplus before or after the leader was picked, or if the leader were a despot who demanded tribute or not. The important thing was that they had to make things better. And they had to keep helping things improve for a fairly long period of time.

That’s because “producing more food” didn’t make the leader successful for the reasons you might think. What really happened is that with more resources the leader’s society could grow larger; out-competing any other societies in the area. This effectively gave the leader a monopoly on “being in a society” (which, as a social species, we tend to like). So even if they were kind of a dick, the common-folk had no viable alternative and the hierarchy lived on. Another interesting revelation is that the door swung both ways. If the leader didn’t improve the situation then they couldn’t drive out the egalitarian societies. Then, the instant they imposed a cost on the society, whether a tax or simply the resources needed to feed them, everyone decided to go back to the egalitarian societies instead.

So this research paints a nice, neat little story about how the first leaders were born. Given it’s a simulation (and thus a simplification) I’m skeptical of whether this nice narrative every played out in reality; and that’s a failing the researchers admit. However, both they and myself think that this simulation shows quite convincingly that leaders played a more pro-active role than some give them credit for. They couldn’t have just piggy backed on a successful society, they had to help make it more

The first leaders were born when people asked not what they can do for their leader, but what that leader could do for them. I feel like the fact that phrase has been flipped round says something deep and profound about our society, but for the life of me I can’t figure out what that is.

15 thoughts on “How were leaders born?”