The Neanderthals were a close relative of ours that lived in Europe from 350,000 years ago; until we turned up on the scene and they promptly went extinct and….this is all old hat for most of you. Research finding out that something thought to be the cause of the Neanderthal extinction didn’t actually kill them off is a topic that’s come up on EvoAnth a dozen times before and it’ll probably come up a dozen times again. So lets cut straight to the meat of the topic shall we. What aspect of Neanderthal inferiority has been disproven by recent research?

Now, in fairness this is an idea whose death has been a long time coming. For a while people though the Neanderthals were dumb brutes who couldn’t hope to match the technologically advanced Homo sapiens who rocked up and drove them extinct with their hyper-advanced pieces of rock tied to pieces of wood (aka spears). But this is a view that’s been on the decline for decades, if not a century. It turns out Neanderthals were perfectly capable tool makers after all (shock horror, a species with a brain like ours was smart like us). However, there has been an underlying view (even expressed here a few times) that Neanderthal technology still wasn’t quite as good as that made by modern humans. It wasn’t rubbish enough to explain their extinction, but we still got to feel a little bit superior about the size of our ancestors’ spears.

And that’s what this latest research (published just a fortnight ago in PLoS, aren’t I current!) purports to disprove. Armed with almost two centuries of archaeological research they re-examine the Neanderthal record to look for evidence of all the behaviours in which humans were thought to be superior. Turns out not a fat lot of human uniqueness survives this treatment. But first, what about humans was thought to be special anyway? To explain it as quickly (and hopefully least boringly) as possible; here is a table listing all the special things humans were thought to do that made them better than Neanderthals 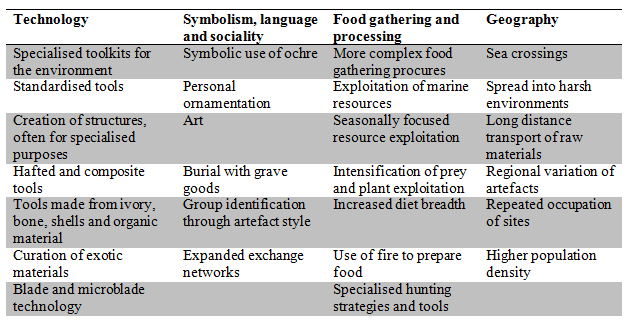 I made this table for you, I hope you like it

And it turns out Neanderthals made:

Those of you with a keen eye (or at least, dedicated enough to have read the table) will note that not every aspect of human uniqueness has thus been found in Neanderthals. Where are their boats, their microblades, their specialised and standardised tools, their intensive exploitation of prey? Their missing from this discussion. Now, I’m not saying these factors were responsible for them being dead and us being not. The fact we crossed the sea is probably not the cause of our success. Simply that at the end of the day we’re in the exact same place we started: humans having a marginal technological advantage, but not enough to explain why we’re the only ones left.

If that’s a new revelation to you congratulations. For the rest of you, I’ve just wasted your time. Which I think is only fair because this paper wasted mine. But hey, it’s a fairly decent review and it’s in PLoS, which is free to access. So if this is a topic that interests you then it’s worth a read (here’s the link again, to save your scrolling finger from all the effort going back to the top of the page); but it does not remove the modern human superiority complex.

No, you have to be extra skilled to take down that; anatomically modern humans have mastered the art of arrogance.

30 thoughts on “Neanderthal technology on par with humans”