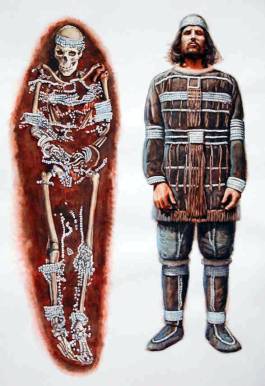 Sunghir is a 22,00 year old site where someone was buried in clothes made from thousands of beads, along with huge mammoth ivory spears

Our ancestors were burying their dead with food and symbolic items over 100,000 years ago; strongly suggesting that they believed in some sort of life after death. In the last 10,000 years religion seems to have undergone a sort of revolution. Farming drove the development of large complex societies, and these groups seem to have begun believing in deities that gave rules and commandments. Perhaps because in these large groups it became increasingly important that everyone follow the rules and a supernatural motivation for doing so became very beneficial to society. Sure enough, studies have show that exposing people to these rule-giving religious ideas makes them more likely to behave.

Understanding how these moral-giving gods arose is important; given that these beliefs continue to influence our society. But how did religion get off the ground in the first place? What was it 100,000 years ago that pushed our ancestors towards a belief in the supernatural? This is a topic that has had dozens (if not hundreds) of papers written about it; making it difficult for me to summarise for you lovely people. But throughout all this argument and debate, one key idea seems to have risen to the top: our sense of agency.

Humans have the ability to attribute thoughts, beliefs, desires and emotions to others. This isn’t unique to us, but we are really good at it (in fact, we’re the best in the world). Children develop the ability to attribute agency to others between the age of 3 – 5; and the super-sense of agency often goes a bit overboard and they also begin attributing agency to other things. Things like storms, toys and plants are believed to have goals, desires and beliefs1. They even begin thinking that dead things have agency, perhaps explaining why our ancestors began to bury their dead2.

Perhaps most importantly, they start having this over-active sense of agency even if they have no religious or supernatural education3. It seems to be an innate trait that children naturally develop; so it’s easy to see how it could give rise to religious thought in prehistoric societies if left unchecked. But is this enough? Most argue no, and there are a bunch of other characteristics people believe are needed for religion to arise.

One particularly interesting one is that religious concepts need to be a certain kind of counter-intuitive. Ideas which break our expectations (like a talking donkey) elicit a particular electrical reaction in our brains that can be measured with EEG (you know, when they put electrodes on someone’s head). Interestingly, religious ideas which break our expectations the same way elicit less of a reaction. Someone saying “then she gave birth to a house” is going to confuse our brain more than “then she gave birth to the world”4.

An paper published earlier this year argues that this is because these religious ideas are so impossible we wind up viewing them metaphorically. Even if we wind up thinking of them as literally true (young earthers, I’m looking at you), this metaphorical aspect means they still seem less counter-intuitive than a comparable belief you try and take literally right from the get go. So whilst our hyper-active sense of agency could give rise to supernatural beliefs, they’ll only survive if they’re crazy enough to not seem literal straight away, but aren’t too crazy they break all our expectations. Ideas which can walk this tightrope will wind up being incredibly successful, and these religions can last for thousands of years4.

Perhaps this information is useful for any atheists out there, looking for another way to argue against religion. Dispense with as much vaguery and metaphor as possible, really hone in the literal, real world implications that these beliefs result in. Try and remove their metaphorical shielding that acts as a literal shields for their beliefs; really hold their feet to the fire over the literal aspects of their beliefs. Don’t let them get away with such vagaries as “God is love.” Perhaps you can tip their counter-intuitive meter over the edge.

But before everyone goes running off to start a religious flame war in the nearest forum; it is worth noting these ideas are mostly speculative. Sure, the EEG does show there is something special about the counter-intuitive properties of religious thought, but the interpretation that this special-ness is that they’re viewed as metaphors is complete speculation by the authors. Which is great for me as it means I get to squeeze a few more posts on the topic. There’s no final answer yet! That said, this idea that religious beliefs are metaphorical doesn’t seem particularly….counter-intuitive.

14 thoughts on “Religion has its roots in metaphor?”