Last week Bill Nye and Ken Ham (of Answers in Genesis) had themselves a little debate over whether or not creationism was a viable scientific model. In the aftermath Buzzfeed asked 22 creationists for a message for evolutionists; but they only got back 21 answers. Two people asked the same question, a question I hadn’t heard before: why is there only one Lucy?

My answer: There is more than one Lucy! We’ve found tens of thousands of fossils belonging to the human family (also known as hominins), representing over a thousand individuals across 20+ species. Although most of these fossils are fragments, there are still dozens that would give Lucy a run for her money in terms of completeness. So, because Buzzfeed isn’t the only website that can create lists, here are 5 of some of the most complete and most important hominin fossils; aside from Lucy.

Big man gets top billing for being an immediate refutation to the creationist question. It’s a member of the species Australopithecus afarensis, like Lucy, it lived around the same time as Lucy (although at 3.5 million years old, it’s slightly older) and it’s really complete, like Lucy. It short, it’s effectively a second Lucy. The key difference being, as the name suggests, this one was a male. It was a also taller, indicating that Au. afarensis was a sexually dimorphic species, much like modern chimps.

Big Man is also a big deal because he preserves some features missing in Lucy, filling in some of the missing gaps. Most notably he contains a shoulder blade and more complete ribcage, which are substantially more human-like than expected. In fact it’s so similar that Answers in Genesis have actually argued that this Australopithecus is actually a modern human! Lucy’s species was apparently spending much more time walking upright than we’d anticipated; confusing creationists to no end. 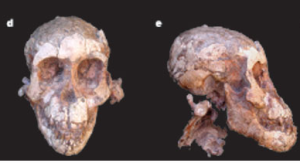 The Dikika fossil, with spine intact (some of the rest of the skeleton were also found, but this is the coolest bit)

The Dikika fossil is a young Australopithecus afarensis from Dikika, Ethiopia (turns out palaeoanthropologists aren’t hugely creative when naming things). Like Big Man, Dikika is slightly older than Lucy (at 3.3 million years old) but in terms of age at death, is younger than both; being a mere 3 years old or so when she died. As a juvenile, Dikika can tell us a lot about how Australopithecus matured. Turns out they were very similar to chimps in this regard, growing up faster than your typical human baby.

However, Dikika is also really important because her spinal cord is still sticking out of her skull. As such it provides an opportunity to accurately measure the orientation of the spine; which in turn tells us about how Australopithecus moved. Turns out Dikika’s spine is orientated vertically, indicating an upright body that walked on two legs (compared to a horizontal orientation, which would’ve suggested a quadrupedal body like a chimp). This is particularly relevant because one of Answers in Genesis’s key arguments against Lucy being a “transitional form” is that she walked like a chimp. Dikika kicks this one right out the window.

Okay, I’m pushing the boundary of “most complete here”. All we have of Australopithecus garhi is a fragmented skull and jaw. We do know they lived ~2.6 million years ago (making it younger than Lucy) and limbs associated with the skull indicate it walked upright. But I’m still going to put Au. garhi on my list because it appears to have been the first hominin to manufacture stone tools.

Creating stone tools is an ability unique to humans and our ancestors. Australopithecus garhi started a tradition that lasted, essentially unbroken, for the next 2.6 million years. In fact, some modern hunter-gatherers still use some of the techniques pioneered by Au. garhi millions of years ago. So if creationists want to argue that Australopiths and humans are unrelated, not only do they have to argue against physical similarities but technological ones too! In fact, some creationists use stone tools to define “humans”. If a hominin – like Neanderthals or Homo erectus  – made stone tools, it’s actually fully human.

No word yet on whether Australopithecus garhi is considered a modern human.

MH1 and MH2 are the only fossils we have of Australopithecus sediba. Fortunately, they’re both very complete so we know almost as much about this species as we do any of the others with more fossils. For example, like everything else on this list it walked upright like humans. Evolutionarily speaking, Au. sediba is significant because it is the youngest known Australopithecus, living 1.9 million years ago. This makes it too young to be a human ancestor, as species like Homo erectus had already appeared by this period.

And that’s the point of MH1 & 2. They show our family tree is not a simple, ladder like progression from Lucy to Homo erectus to us. The hominins were a diverse group and during our heyday there were more than 6 or so species living side by side. We’re a successful family with multiple branches, each specialising into their own unique niche.

Skull 5 is the latest discovery from Dmanisi and is attributed to the species Homo erectus; which is thought to be the descendant of Australopithecus and the precursor to later humans (including, eventually, us). Skull 5 lived ~1.8 million years ago and is the most complete skull we’ve found from that period. We also found some of the rest of the skeleton; but that’s rather boring and can be summarised as “human-like.”

The skull is the really cool thing because, despite the human-like skeleton, it is rather primitive. The brain is very small and the face protruding, like a chimp or Australopithecus. Yet it’s still clearly a member of Homo erectus. This makes skull 5 significant for 2 reasons. First, creationists often try and dismiss H. erectus as “just a modern human.” However, when you plot skull 5 on a chart comparing face size and brain size between different species it appears very far from modern humans, rendering this creationist argument null and void. What’s more, when you start plotting other hominins on the chart you witness a beautiful progression from chimp-like to human-like. If you want a great piece of evidence for evolution, look no further than this graph.

It’s also significant because it shows Homo erectus could be highly variable. As such, many similar fossils which had been previously classified as a different species may actually have to be re-classified as Homo erectus, dramatically simplifying the hominin family tree. And you won’t hear me complaining about that, learning the differences between Homo erectus and Homo ergaster was tedious.

Also, skull 5 is hilarious because the Institute for Creation Research (ICR) can’t decide what it is. Shortly after it was discovered they ran an article arguing it’s actually a modern human, before writing a second one the following week dismissing it as just an ape. In fact, they went so far in the opposite direction they argued claiming it was a human is to misrepresent the facts so badly it borders on fraud!

There’s only one Lucy but there’s loads more hominins just as complete; a few of the important ones I’ve listed here. As I was looking up some links for this article I found loads in the mainstream press. These aren’t obscure fossils, in fact many of you might remember the hubub over skull 5 from the end of last year. So I wound up asking myself: why were these creationists convinced there is only one Lucy.

Then I realised, many are still bring up Piltdown man. In fact, if you look at the hominin fossils creationists regularly discuss you see the same few being repeated over and over again. Piltdown man, Java man, Nebraska man; all dismissed as hoaxes or mistakes. The Neanderthals or Homo erectus might get a mention too, only to be classified as “fully human” and ignored. Lucy is the only fossil they present as genuine (and even then it’s typically claimed to be just as an ape).

As such, it’s easy to see how if you’re only exposure to human evolution is through a creationist lens you’d come away with an out of date, limited and distorted view. You’d be missing out on a wealth of fossils and evidence that maybe, just maybe, might prompt you re-evaluate your position. At the very least, I’d hope it would cause you to ask why these fossils are so often ignored by creationists in favour of out of date, irrelevant finds like Piltdown man.

19 thoughts on “There’s more than one Lucy: Responding to Buzzfeed’s creationists”