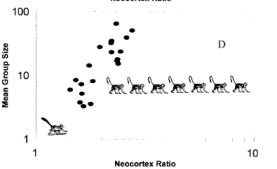 The link between group size and brain size (or rather, neocortex size) in modern primates on which the SBH is based. I’m not sure why there are random monkey pictures on it

Humans have rather big brains; a fact you’re probably aware of. The social brain hypothesis is one of the most popular and well supported explanations for why our brains got to be so freakishly huge (although it is by no means the only decent idea). The gist of the SBH is that living in large groups is beneficial (as you have more friends to help search for food, fight off competition etc.) but very intellectually demanding (since you have to remember who everyone is). Thus natural selection drove us to develop bigger and better brains so that we could live in bigger and better groups.

Because it is based on a link between brain size and group size, one upshot of the SBH is that you can infer some interesting facts about our ancestors’ social lives from their skulls. This has been used to provide estimates about when language evolved, for example. However, despite the importance of the SBH in understanding hominins it has not been tested against the fossil record.

This is primarily because sociality doesn’t really fossilise. We can’t look at Australopithecus and double check how big their groups really were or whether they spoke. Fortunately, a few years ago researchers from around the UK came up with some predictions based on the SBH that may actually be testable against the fossil record. They used the social brain hypothesis to calculate our ancestors’ territory sized. Although they were doing this for other reasons (which I wrote about at the time) this does provide an opportunity to test the SBH. 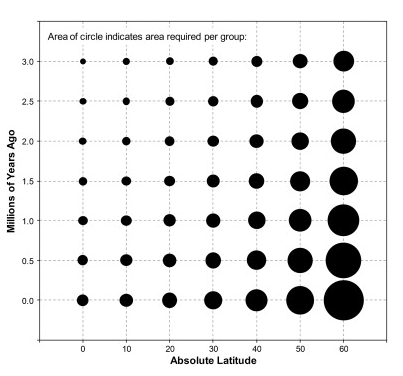 The territory size estimates for our ancestors

As our ancestors developed larger brains they began making stone tools. However, these tools could only be manufactured from stone with certain properties and such rock is far from ubiquitous. In some cases hominins transported raw materials hundreds of kilometres from their source. This distance is likely connected to their territory size, allowing the predictions of the SBH to finally be tested against the palaeoanthropological record.

Earlier this year I undertook such a test, comparing the predictions of territory size to a rather large catalogue of prehistoric tools (and the distance raw material was transported). My results seemed to confirm the social brain hypothesis, showing a statistically significant similarity between the distance our ancestors transported stone and their predicted territory size.

The territory size predictions (blue) compared to the distance raw material was transported (red and green). Because the archaeological record is incomplete not all of the SBH predictions could be tested, hence the gaps

However, the estimates of  territory size were not just calculated from the predictions of the social brain hypothesis. Latitude has a strong impact on the territory of modern species, with those living further north having larger territories to compensate for the fact resources tend to be more widely spread out at high latitudes. So they used data on modern hunter-gatherer territories to calculate the impact of location on their estimates and altered them accordingly.

To investigate whether my test was validating the social brain hypothesis or this extrapolation of modern latitude data (or both) I performed another set of analyses. I took the average territory size for each time period (ignoring the effect of latitude) and compared that to the SBH predictions. I then did the same thing for latitude ignoring time. Thus if raw material estimates continued to match the average estimates for each time period this would be further validation of the social brain hypothesis.

Surprisingly this was not the case! There was a statistically significant relationship between the predictions and the archaeological data when it came to latitude, but not when it came to time. In other words the reason the predictions came back as positive the first time was because the hunter-gatherer estimates were making them seem accurate. The aspects of the predictions based on the social brain hypothesis don’t actually match up.

(as an interesting aside this suggests that the sort of environmental pressures modern groups face is the same as those that troubled our distant ancestors. Despite the fact hunter-gatherers have much more advanced technology than Homo erectus and the Neanderthals they’re still plagued by the same problems. An extra hundred thousand of years of advancement has not shielded them from the troubles of northern climates.)

I don’t think my test is enough to disprove the social brain hypothesis. After all, there are many factors I wasn’t able to take into account. If our ancestors were trading raw material (so it travelled over multiple territories) then this would mean the stone transport distance isn’t a suitable test of the territory size predictions. And there is a lot of data from living species that supports the SBH.

However, these results certainly raise an eyebrow over the validity of the social brain hypothesis. Although we should not discard it we should perhaps take it with a pinch of salt. This is particularly relevant given just how many ideas are based off the SBH. Perhaps we should double check the foundations before we go building a hypothesis on them.

Today there are no references as this is my own research and I want to reduce the chance of plagiarism  However, I have all the citations and raw data. If you really want to see it use the contact me form to send me an email. Also, if I manage to get the work published I’ll be happy to be more liberal with my work.