Fossil evidence indicates that modern humans evolved in Africa around 195,000 years ago (McDougall et al., 2005). Genetic data confirms this, showing that all living people share an African ancestor that lived  around this time as well (Soares et al., 2009). However, if we’re all African at heart this raises the question of when did some of us leave our homeland and migrate across the world? New research appears to have uncovered the most accurate date for the out of Africa migration yet, and it’s much older than we previously thought.

A reconstruction of the first modern human

Trying to figure out when some of us left Africa has always been tricky. You could look into the archaeological record and try and figure out when the earliest evidence of humans living outside of Africa is. Such investigations typically give dates of ~50,000 years ago (Turney et al., 2001). However, the archaeological record is incomplete and so there’s always the possibility that older examples of humans living outside of Africa will be found. As such scientists have started to focus on  DNA evidence. After all, everyone has a complete genome inside them! Early research into DNA evidence for the move out of Africa produced similar dates, suggesting that we left ~50,000 years ago (Quintana-Murci et al, 1999).

However, many of the figures used in the early research were based on early work and so not completely accurate. Since then we’ve sequenced the genomes of several thousand people, providing a more reliable figure of the number of mutations that occur in each generation.  As this new data has been made available there’s been a slurry of researchers using it to produce more accurate dates for various splits that have occurred over the course of human evolution. For example, the date of the human/chimp split has been pushed back from 5 – 8 million years ago to 7 – 13; whilst the date for the human/Neanderthal divergence has been updated to between 400 – 800 thousand years ago (Langergraber et al., 2012). 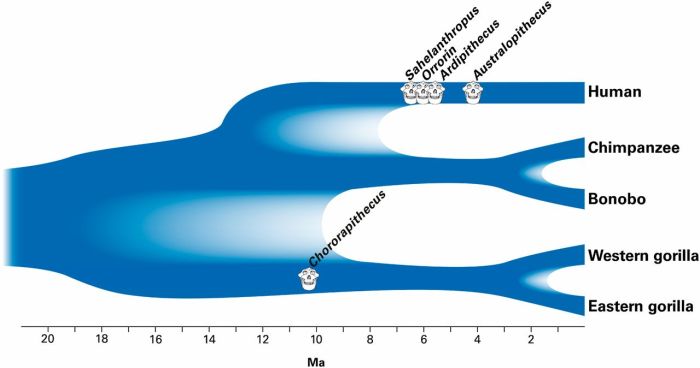 The recalculated divergence of humans and chimps

This is also what the new research into the out of Africa migration has done. Alywyn Scalley and Richard Durbin from the University of Cambridge used these new, more accurate figures to recalculate the split between African and non-African populations. Their results show that non-Africans first left Africa between 100 and 120 thousand years ago; which is more than double the earlier estimates (Scalley and Durbin, 2012). This spread out of Africa would’ve taken a long time. People weren’t exploring to find new worlds but just heading to new pastures as areas became overpopulated.

This date is more consistent with other archaeological evidence, which shows that modern humans were living in the Middle East by 115,000 years ago (Schwarcz, 1988). Under the old dates these early sites were viewed as a failed migration, where people tried to leave Africa but were driven back (Quintana-Murci et al., 1999).  Under this new approach these early sites were the first port of call as our species spread throughout the world. Since Neanderthals were also living in the area, this may have been where we the famous human/Neanderthal interbreeding occurred (Scalley and Durbin, 2012). 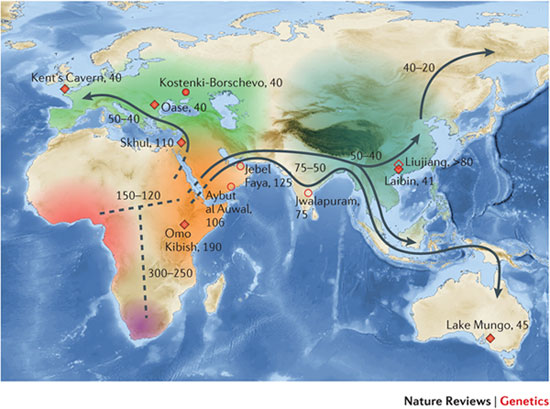 Our redated journey of of Africa

They also redated the human/Neanderthal split and produced figures very similar to those other researchers have arrived at. The fact that multiple teams from across the world are getting the same results suggests that these dates are accurate. However, all is not peachy in the world of genetics. Another recent study by an international team of researchers has produced a contradictory date, suggesting that humans actually left Africa 90 – 60 thousand years ago (Fu et al., 2013).

This other date was produced by examining mitochondrial DNA, rather than the DNA from the nucleus the Cambridge pair studied.  Both approaches have their advantages and disadvantages so it’s difficult to say whose correct at this juncture. Hopefully it will become apparent with future research.

For the moment we can say that some humans left Africa some point between 60 and 120 thousand years ago. As they spread throughout the world the met other members of our family, such as the Neanderthals, and interbred with them. Now we live on every continent, and even in space. Yet we’re the last of our kind, as the other members of Homo we met as we travelled the globe have since gone extinct. Let’s hope our family doesn’t disappear entirely, eh?

Help stave off the disappearance of humans by following me on Twitter or liking EvoAnth on Facebook.

28 thoughts on “When did humans leave Africa?”