Today’s question allows me to win the award for “starting the most words in a title with a vowel.” It comes from Jose who asked (a while ago, I’m a bit behind)

In fact telling cousins and direct ancestors apart is so difficult that most evolutionary biologists rarely talk about “direct ancestors”; or if they do they use the term to refer to an animal that is either a direct ancestor or a very close relative to the direct ancestor. Similar to how the skeletons of goats and sheep look very similar so on an archaeological dig any discoveries are called “sheepgoats” because we can’t tell them apart.

Maybe we can’t tell them apart because there’s some funny business going on. These two certainly look very happy to be together.

This problem is most pronounced when we’re dealing with species. There can be several, closely related populations who look similar so figuring out how they’re all related is really hard. It’s a bit easier when dealing with groups of similar species, known as a genus.  The difference between these groups tends to be larger (because if they were similar they’d just be grouped into the same genus) so it’s easier to figure out who is most closely related. Fortunately for me Australopithecus and Homo are genera; which makes this question less difficult than it could’ve been. Thanks Jose!

The earliest fossils of Homo (our genus, as in Homo sapiens) we’ve found are in Africa, so it’s reasonable to look for the ancestor of that genus there. In fact, that’s what we’ve been doing since the 1920s. In that time we’ve found loads of genera that appear to be closely related to Homo; two of which lived just before them so would make good candidates for an ancestor. These are Australopithecus and Paranthropus. There is a third potential ancestor called Kenyanthropus, but there is debate over whether or not it actually exists. We’ve only found one skull so far and it’s very mangled.

Both of these were alive prior to 2.33 million years ago, when Homo first appeared so could be the ancestor. Of these, Australopithecus is most similar to Homo as it isn’t as thickly built. The skull of Paranthropus  is particularly robust; with large chewing apparatus that render it decidedly un-Homo like.

So, of all the genera we’ve found Australopithecus does seem to be the best fit for the ancestor of Homo. They had feet like us, walked upright like us and even made tools like us! Plus their face and limbs are very similar to early members of Homo; with a comparatively small brain, sticking out face, short arms, long legs and long fingers etc. They even had a stronger achilles tendon, like us, that allowed them to run well. Many of these features exist in a slightly more primitive form than that seen in Homo, which is exactly what you’d expect to see in an ancestor. 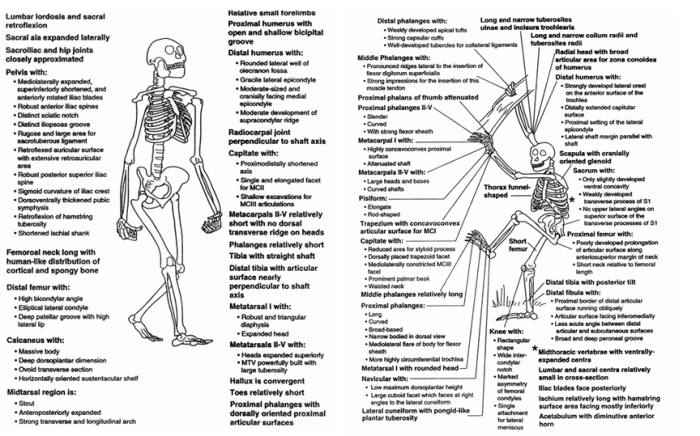 Traits Australopithecus shares with us (left) and traits they have that are primitive (right). The combination of the two indicates they are our ancestor. (Click for bigger image)

In fact, Australopithecus is so similar to what we’d expect the ancestor of Homo to look like that it’s not just a process of elimination that led us to conclude they were our ancestor. They don’t just look more like the ancestor than Paranthropus did; they look like the ancestor should full stop. As such we can be very confident they are the direct ancestor of Homo although – although unlike the material palaeoanthropology examines – this conclusion is not set in stone.

If you have a question to ask, get in touch! You can do it through Facebook, Twitter or e-mail. There’s so many ways to talk to me I’ll be offended if you don’t!

9 thoughts on “Are Australopiths our ancestors?”