The human lineage evolved in Africa until ~1.8 million years ago when Homo erectus strode forth into the rest of the world. H. erectus was the first hominin to have the basic modern body plan: long legs for bipedalism, short arms with dexterous fingers and a flattened face with a bigger brain. However, not all of these appeared simultaneously and the first Homo erectus to leave Africa had relatively small brains and lacked the advanced technology of later members of their species.

They only produced simple, Oldowan-style flakes formed by smashing one rock with another. The resulting debris was sharp and could easily be used for cutting things. They also appeared to have made some “developed” Oldowan tools. The developed Oldowan is the transitional industry between the Oldowan and the later Acheulean. The latter is famous for symmetrical handaxes, the basic form of which appears in the developed Oldowan.

Homo erectus gradually developed larger brains and the aforementioned Acheulean appeared ~1.7 million years ago. The symmetrical (bifacial) handaxes were flexible and could be used for a range of tasks. Although they took longer to manufacture they also lasted longer than the Oldowan flakes, meaning you didn’t have to carry raw materials around with you. Crucially, the handaxe is not a natural form so must be planned in advanced, hinting at the improved cognitive capabilities of Homo erectus.

Once the Acheulean had appeared it quickly spread throughout the world of Homo erectus, with handaxes being found in the Middle East, Africa, Spain and India. However, for some reason Homo erectus in East Asia doesn’t manufacture handaxes. There is a pretty clear dividing line which separates handaxe making H. erectus in the west and those who don’t in the east. This is known as the “Movius line,” named after its discoverer Hallam Movius.

Although there are some new Korean and Chinese finds which show the issue isn’t as black and white as first thought they don’t refute the Movius line. Chongokni – a famous Korean handaxe site – is only 350 – 300 thousand years old making it much younger than the “true” Acheulean. Meanwhile finds from the Nihewan Basin in China are a lot larger and cruder than classic handaxes, more akin to the primitive developed Oldowan than the Acheulean. 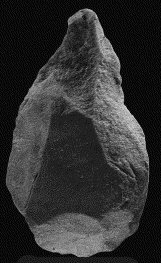 A handaxe from the Korean site of Chongokni

So why did Asian Homo erectus not make handaxes? Whilst a range of ideas have been put forward none have been confirmed. Hallam Movius suggested it was because bamboo and other plant resources in Asia were used to make tools rather than stone. However, Homo erectus still made Oldowan tools, casting doubt on this conclusion. A more pragmatic idea is that we simply haven’t found them yet.

Other plausible ideas include the notion that they simply didn’t need to make handaxes, with Oldowan tools being perfectly suited to their function. Alternatively land barriers, such as the Himalayas, hindered the ability of cultural developments to flow into East Asia.  I’m particularly fond of that last one, although the pragmatic hypothesis does have a certain amount of logic to it. For the time being the movius line is a mysterious quirk in our cultural history.