The classic “ascent of man” image has our lineage progressing upwards. First we were knuckle-walkers, like modern chimps, but then switched to bipedalism. Over time we gradually became more and upright, straightening our backs and striding forwards as modern man. It’s a noble image of our origins and almost ubiquitous with the field of human evolution. Yet despite reflecting a popular model for how bipedalism arose (albeit with some artistic license) the issue is far from settled.

The ascent of man

Modern primates move about in a range of different ways. From swinging through the trees to walking along branches to knuckle walking to quadrupedalism and many more. Over the past 200 years of evolutionary thought almost every single one of them has been suggested to be the predecessor of bipedalism our ancestors used.

Indeed a lot of early attempts to find the fossils of our ancestors was based in Asia because scientists noted that human bipedalism is very similar to orang-utan bipedalism. Based on this they believed they were our closest living relatives and thus we had evolved in Asia, where orang-utans lived. That’s why a lot of the first hominin fossils from the late 19th/early 2oth centuries (such as “Java man“) are from that part of the world.

As the focus shifted to Africa in the 1940s/50s people began to notice chimps a lot more and soon worked out that they were actually our closest living relatives. Because of this they became the de facto model for early hominin behaviour, including the source of bipedalism. Chimps do sometimes walk upright and when they do so they walk with a “bent-hip, bent-knee” posture. From this semi-squat bipedalism evolved.

How chimps actually walk (left) and how they would look if they walked like humans (right).

Walking in this manner is woefully inefficient. Keeping the legs and hips bent requires that the muscles there be working continuously which is both costly and painful. Although it isn’t all bad – it’s a lot more stable than human bipedalism – you can clearly see that there would be some pretty strong selection pressures to make it more efficient.

Asimo, the most advanced bipedal robot in the world, walks like a chimp for stability

However, there are some strange aspects to chimp bipedalism which some researchers argue is incompatible with this model. In particular there’s the fact that chimpanzees walk the way they do not because of any anatomical failing in their legs or hips but because their spines aren’t flexible enough. They can’t bend their back to alter their centre of gravity so instead have to bend their knees.

This lack of flexibility stems from the fact chimpanzees have lost a vertebrae, shortening their lower spine. Also, that spine is trapped between their tall iliac blades. This is to make their back more rigid, allowing them to knuckle walk with significantly less effort. Bonobos, an offshoot of chimps, have also shortened their spine but have done so in a different way. Chimps have fused two of their vetebrae together whilst bonobos have moved the spine upwards, shortening the lower part of it.

Given that out of humans, chimps and bonobos 2/3 of them have long spines it seems reasonable to conclude that their common ancestor had a long spine and the chimpanzee shortening is relatively recent. As such that last common ancestor would have been better at walking bipedally than modern chimps and have less “evolving” to do in order to become more efficient. There would also have been only a small amount of evolution necessary to become better at knuckle walking.

To figure out which is the right answer requires looking at the hominin lineage since our ancestors are the closest (time wise) to the last common ancestor. The chimpanzee lineage is woefully incomplete forcing us to rely on our own to delve back to the splitting point. All that is known of Orrorin

The closest specimen we have is Sahelanthropus tchadensis  which is so near to the split some even suggest it may be the common ancestor. However, it is only known from a partial skull and so not much use when it comes to working out if they were bipedal. The next up is Orrorin tugenesis  which is a bit more complete. A partial femur was recovered and identified as at bipedal, although other parts of the skeleton indicate it also spent a fare bit of time in the trees.

Ardipithecus ramidus   provides the best information on this topic with over 45% of the skeleton being recovered. Dating to ~4.4 million years ago it falls almost halfway between modern humans and our common ancestor with chimps. Thus one might expect it to be morphologically halfway between humans and chimps. About halfway upright on “the ascent of man”, if you will.

Yet it isn’t. Ardi, as one find is affectionately known, was able to walk upright pretty well. Whilst “she” wasn’t as good at it as later hominins her bipedal ability was still significantly improved over chimps. There’s no evidence that it engaged in bent-hip, bent-knee locomotion.

Indeed, there’s no evidence it engaged in knuckle walking at all. However, there does seem to be some evidence that it spent a fare bit of time in trees and whilst it did so it walked on all fours across branches. Not knuckle walked, but with the foot flat. It also appears to have done quite a lot of swinging whilst up there based on its arm adaptations. 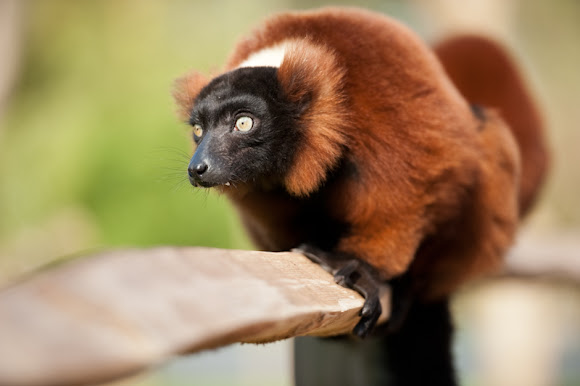 Kind of life this guy, only with less tail.

Given all of this it seems we can “redraw” the ascent of man (although new finds are still changing things so this is far from the final redraft). Since knuckle-walking appears to be a derived feature that only chimps developed our common ancestor instead moved more like Ardi did in the trees. Swinging from branch to branch and walking flat footed on all fours across the branches she arrived at.

As the “locking” of the spine (which prevents bipedalism) also appears to be a feature unique to chimps the common ancestor would also have been fairly decent at bipedalism had it ever gone to the ground. Whilst it would’ve been no Homo erectus it would not have had to rely on the “squat” walk of chimps.

Two lineages began to emerge in this common ancestor. One appears to have focused on the quadrupedalism used in the trees, starting to use it on the ground. To make this method more efficient this branch eventually turned the flat footed quadrupedalism into the knuckle walking quadrupedalism present in chimps today.

The other focused on their bipedal ability, gradually making that more and more efficient until they could stride out of Africa and spread across the world. Their brains expanded and they began to wonder where they came from, eventually looking back to the common ancestor who had started it all by dropping out the trees.

Special thanks go to Professor John Gowlett and Dr Matt Grove for helping me get my mind around some of the finer points of Ardi’s anatomy.

10 thoughts on “Did our ancestors knuckle-walk?”